Ride it, fold it, commute it! Bike & train

Fed up with awkward connections between the train and bus in Newcastle, Stevan Cambridge, 56, discovered that a folding bike would make his journey to work quicker and more convenient than ever before. And colds are a thing of the past… 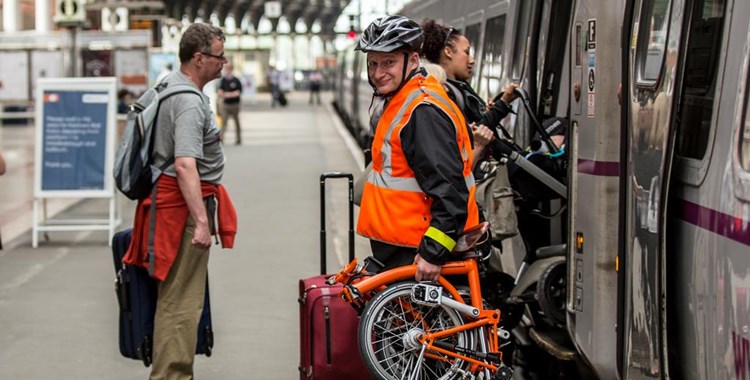 Stevan arrives at Darlington station with his folding bike "Orange Flash" in hand.

Where do you live and work?

I live in Darlington and work near Walkergate in Newcastle and is a complex journey going by train, bus and metro.  Going by car is unpleasant, journey times can be unpredictable and traffic can be horrendous. It’s worse in the winter too.

What mode(s) of sustainable transport do you use?

Bike and train.  The primary purpose is to get to the station, which I can do in 7 minutes flat.  It’s very convenient.  Then I go to my work in Walkergate, Newcastle.  It’s mainly urban cycling.  I can whizz across town to see my mother at weekends.

Why did you decide to change the way you get around?

I started about two years ago.  The journey was made worse by the fact that you have to change Metro trains and you very often had to wait 10 minutes for a connecting train. The bus routes are circuitous and fraught with delay, which meant that I often missed my train back to Darlington at the end of a day’s work.

I wanted to give cycling a go, but found that taking a full size bike on the train was difficult with the space available and I sometimes had to walk to the very end of the train to get on.  Plus I couldn’t take a full size bike on a Metro train or bus.  I decided that a folding bike would be ideal as I can cycle when I need to, but I can also take it on the bus or Metro if that’s more convenient.

What benefits have you seen – what have you got out of it so far?

Straight away I found I was in control of my journey.  If the train was late it no longer mattered! The worry of Metro and bus connections had gone.  I cycle in all weathers and rarely get colds.

My circulation has improved and I feel the cold less. Sleep and stress have certainly improved due to cycling. The morning ride is invigorating, even when it’s raining and cold.  Even after a hard day at work I look forward to the ride back!

In a few words, what’s the best thing about ‘doing the Local Motion’?