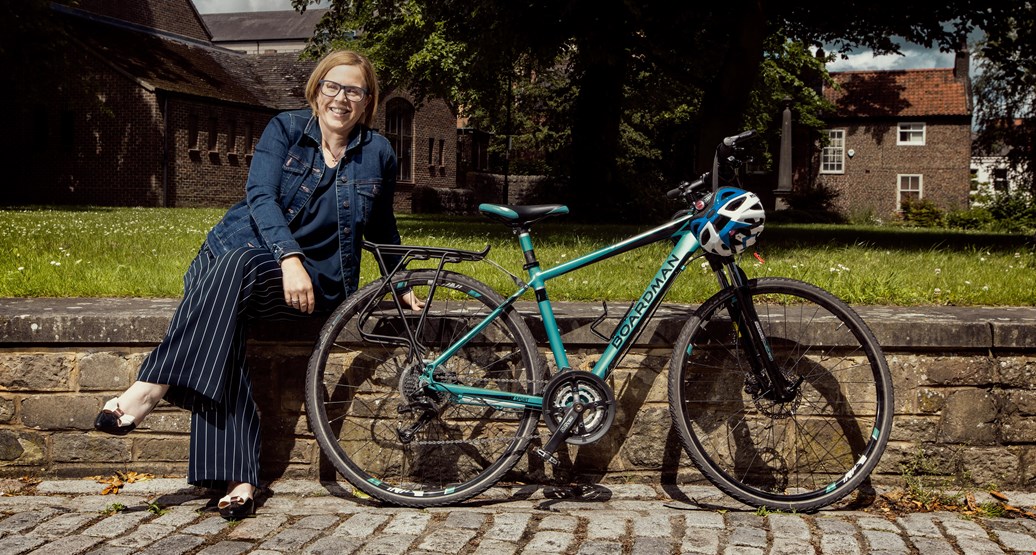 Philippa’s cycling transformation: Biking gave me back my spark

Forty-three year old Philippa Rayner works in IT in Darlington, specialising in digital transformation. Following a marriage break-up in 2016, the busy mum of one bought a bicycle with the aim of getting out more in the fresh air and kick-started a transformational journey of her own.

How I got started cycling

“I first started getting into cycling in the summer of 2016. It was after my marriage broke down and I wasn’t in a good place. I was a little bit overweight and a bit lost.” Philippa remembers, “On the advice of my sister I started to do a bit of running and bought myself a bicycle.

“I hadn’t cycled in years but I went to Halfords and bought my bike. It’s a hybrid, nothing flash. I had never done any commuter type cycling but as I got more confident I decided to try and cycle to work. It’s 6.5 miles door to door, a bit daunting at first but I built up to it.

“I needed to sort my head out and it helped.” she explains, “There are lots of really, really good cycle paths locally which make it easy to travel by bike even if you’re not very confident.”

Building up cycling and increasing distance

On the days when her son was with his dad Philippa would cycle to work. As she got more confident, shorter journeys became longer rides at the weekend.

The following summer Philippa met someone new, he was a keen cyclist and the pair started to do more road cycling together, building her confidence up even more.

Describing how far she now cycles Philippa says: “I’ve just kept going. I’ve done a cycle around Kielder Reservoir and one to Helmsley and back. I was half-dead by the time I got there, it took me four hours, but I would do it again in a second.”

Travelling by bike has so many advantages

“The biggest thing for me has been the benefits in terms of my mental health and well-being. I don’t know where I would be if I hadn’t have done it. I’ve used riding my bike as a springboard for my health -  both mental and physical.

“Work are very supportive of commuting by bike. There is access to secure cycle parking and showers, and health and well-being is a big part of the employment offer here. I bought my hybrid on my work cycle scheme which saved me quite a bit of money.

“In the summer I do longer rides when my son is on holiday with his dad. I have bought him the same bike I have, so when he is home we go together and he’s really enjoying it. A bike is liberating for a child – the equivalent of passing your driving test at that age.

“I love being outside. Being on a bike, it’s not like being in a car. You’re part of your surroundings and it’s dead easy to stop along the way, to take a picture or for a picnic. You get to take so much more in.”

“Your local bike shops are a great place to start for advice on bikes. You don’t need a lot of expensive kit. Through cycling I have become friends with someone who cycles in and out of work. She has five bikes. I am still riding mine, it’s a middle of the road Boardman so wasn’t bank-busting. Over the years I have upgraded it to include panniers so I can carry my laptop and my work clothes, but it’s still the same bike.

On how she finds cycling on the road Philippa said: “A friend helped me with cycling in traffic. I’m used to traffic now and being from the south, so the roads in Darlington are still quite quiet for me.

“Most people today are very accommodating of people on bikes. Yes there is traffic and you need to be aware of that, but you just need to not let it knock your confidence.”

Why are you supporting the Let’s Go Tees Valley #WheelWomen campaign this summer?

“It would be brilliant to see more women cycling in Tees Valley. I think there are perceptions about accessibility. It’s seen as prohibitively expensive and something that is a bit elite but it’s not. It cost me £450 for my bike. It might sound like a lot but when I look at this against what I’ve saved on fuel and wear and tear on my car, plus the exercise I am getting without setting foot inside a gym it puts it into perspective.

“When you’re driving you don’t see your town in the same way. On a bike you can really check out this town and there’s a lot to see. Whether you do it on your own like I did, with a friend or a partner, I really recommend you try it.”