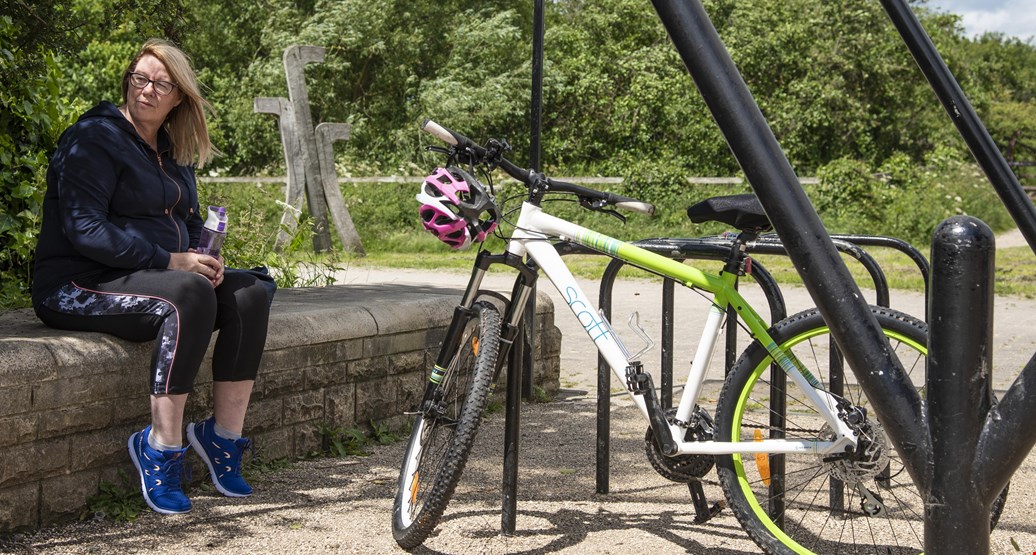 Debbie Franks, a Higher Level Teaching Assistant from Hartlepool, first started her cycling journey when her partner received help to buy two bikes through a Cycle to Work Scheme.

Before this, 53-year-old Debbie, who recently passed her training to become a WW Coach, thought cycling would be really difficult. Her family had always travelled everywhere by car, so it wasn’t something she was used to. But her drive to get fit and lose weight spurred her on, and she hasn’t looked back since.

We gave it a go and fell in love with it

“We bought a bike carrier and drove out to quieter areas to start off with,” Debbie explains, “But it eventually got to the point where I was able to ride my bike home, because I was getting fitter and fitter every time I went out.

“I became so much healthier all-round. I felt better in myself, I was more alert and I wasn’t as lethargic. And because I was cycling, I found myself wanting to eat healthier as well, so that was a big motivation on my weight loss journey.

“Even when it’s difficult, that sense of achievement you get when you’ve finished is amazing. You could be pushing through a really tough uphill climb, but when you get to the top, you’ve done it. That’s all you.

“I just think: ‘Why haven’t I done this all my life?’ It’s my absolute favourite thing to do now.”

Debbie now loves exploring the local area on her bike

“I had tried spinning before, but that wasn’t for me. On a bike, you can go anywhere; it gives you that sense of freedom with it.

“I always stop for a coffee somewhere halfway through my longer rides and I absolutely love that, especially when it’s a nice day and I can sit out on the marina. That’s my little treat that I look forward to when I’m out on the bike.”

It wasn’t long until Debbie’s daughter wanted to give cycling a try and get a bike of her own after seeing the positive changes in her mother.

Debbie adds: "Bikes can be quite expensive, so my daughter looked into getting one second hand, and found one on Facebook for only £18.

"She took it to Summerhill [local cycle centre] to be checked over. My partner and I have taken our own bikes there before, and the staff were great. They serviced both bikes and made a few tweaks, but it didn’t cost us anything.

"My daughter’s bike needed a bit more work done to it when she took her’s in, but they managed to put all that right for her. And, since it didn’t require any new parts, it didn’t cost her anything either. It was brilliant."

"And she still uses that bike now. She cycles everywhere; she loves it. She has actually just completed a 100 mile challenge, but then she upped it to 150 miles."

"I’d definitely recommend a trip there, especially if you pick up a second hand bike. It was really beneficial for my daughter."

What do you think prevents women from taking up cycling?

"I think it’s a lack of confidence stopping a lot of women from cycling more often. I think a lot of women feel uncomfortable about wearing the full head-to-toe lycra you often see in cycling gear.

"I just wear leggings and a normal t-shirt; something comfortable and practical that won’t catch on anything. You don’t have to wear fitting clothing, but it does help."

So what would you say to women who may want to start, but don’t have the confidence?

"I would tell them not to worry. Nobody is looking at them. Even though it may feel like they are, they’re not really.

"But, if it bothers you that much, then you can do what I did and take yourself to quieter areas to start off with, so you can build up some confidence there. Just remember that all cyclists are in the same boat; everyone feels the same way."

“Don’t worry about what anyone thinks. Just do it for yourself.”

Check out your local cycle centre for details of rides, maintenance sessions, maps and more!