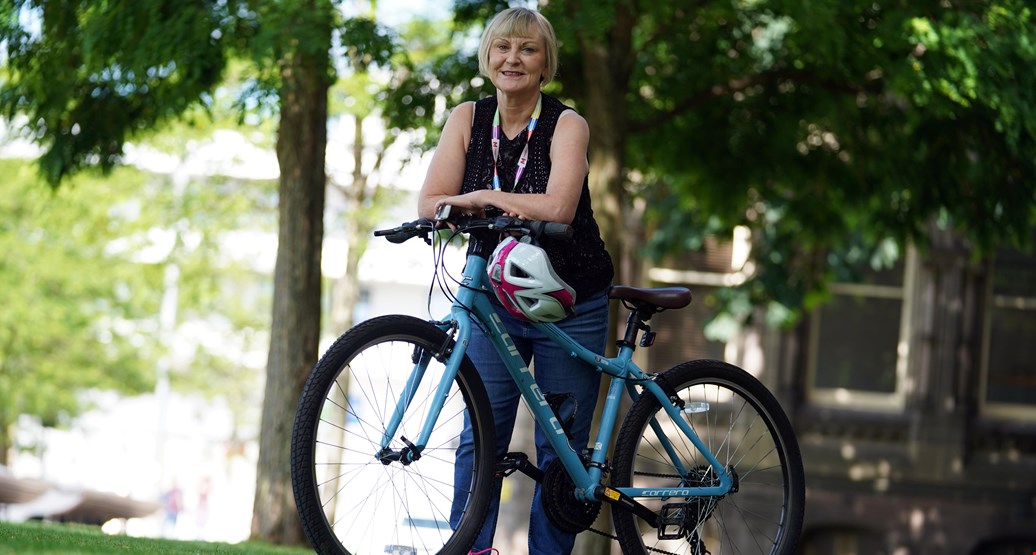 Fifty-six-year-old Margaret, from Middlesbrough, never used to think riding a bike was for her. Her husband and son were both keen cyclists, but she never really considered it herself.

Now, thanks to a confidence boost, she has started cycling to work in Middlesbrough town centre, feeling happier and healthier than ever (and beating the Marton crawl!).

What made you decide to ride a bike instead of driving?

What Margaret really wanted was to improve her fitness. She doesn’t like the structure of a gym, and prefers the freedom of being out in the fresh air.

Her husband was very supportive of her new goal, so he put two and two together and came up with the perfect solution: encouraging her to come out on his rides with their son.

“I knew I could benefit from the exercise. I knew that they enjoyed it and was sure I would too.” says Margaret, “The fresh air and seeing the lovely surroundings as you’re going along is much better for my mental and physical health.”

Making the change to commuting by bike

Since that first ride, Margaret has made tremendous progress. Her fitness and stamina have massively improved, and her mental health has benefitted too; she’s less stressed as a result and feels a lot more energetic.

She has incorporated cycling into her weekend social plans with her husband. The pair often cycle from Stewarts Park to Great Ayton, where they’ll treat themselves to pub lunch before heading back, riding down by the river near the Transporter Bridge.

In June, Margaret also started cycling to and from work, something which she has been building up to for a while.

“I just thought, today is the day I give it a go. And I did. The route was fine, I mainly followed the cycle path along the Marton Road.” explains Margaret, who was more used to being stuck in a car in the jams along the infamous Marton Road, nicknamed the ‘Marton Crawl’.

“My commute is less than three miles each way. It took me exactly the same time as going by car, but I felt so much better. I felt energised and in a much better mood. Weather permitting I am going to keep on doing it.”

Confidence was the key: how did Margaret improve her cycle confidence?

Margaret had been doing weekend rides for quite a while before taking the next step on to commuter cycling, a lack of confidence about cycling on the road on her own was the only thing holding her back.

Margaret found what she was looking for in the form of a group ride from her local active travel hub: Middlesbrough Cycle Centre.  The Tees Valley active travel hubs provide help and support in building cycle confidence and teaching bicycle maintenance. It was something that Margaret really enjoyed and it gave her the confidence to take the next step alone.

Find a group ride near you.

What next for Margaret?

Margaret has decided to keep cycling to work, as well as doing her weekend rides.

“It will save me time as I avoid all of the congestion along the way. Yes, I have to change my clothes at work, but doesn’t take any longer than the walk to and from the car park really.”

Armed with her new-found confidence thanks to the active travel hub group and support from her family, Margaret is now looking forward to making her daily commute on her bike instead.

What advice would you give to women wanting to boost their confidence on the bike?

“If, like me, it’s your confidence holding you back, try to go out with someone who is a bit more confident. Following cycle paths is a great way to start. You can get a free Let’s Go Tees Valley cycle map for your area from your local active travel hub. It shows you all of the cycle paths. I got mine from Middlesbrough Cycle Centre at the bus station.”